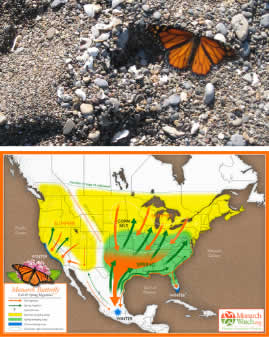 
Arlene Sierra's second piano trio Butterflies Remember a Mountain follows her first major statement for the genre, Truel (2004). Butterflies Remember a Mountain was commissioned by the Bremen Philharmonic Society at the behest of its Artist in Residence, the acclaimed young cellist Leonard Elschenbroich. The stellar trio of Nicola Benedetti, Leonard Elschenbroich and Alexei Grynyuk have since toured the work internationally in venues including Frankfurt Alte Oper, Cheltenham Town Hall, Amsterdam Concertgebouw and the 2015 BBC Proms at Cadogan Hall, London.

This work, my second for piano trio, was inspired by a study of Monarch butterfly migration patterns, as well as by elements from Ravel’s Trio and my own song setting “Diving Girl” from the cycle Streets and Rivers. The work’s title is derived from the three movement titles as follows:


Butterflies Remember A Mountain was commissioned by the Philharmonische Gesellschaft Bremen. It is dedicated with admiration to the trio of Nicola Benedetti, violin, Leonard Elschenbroich, cello, and Alexei Grynyuk, piano.
– A.E.S.


Listen to Arlene Sierra discuss the piece in a BBC Proms interview:

Watch the Dutch premiere of Butterflies Remember a Mountain at the Concertgebouw: 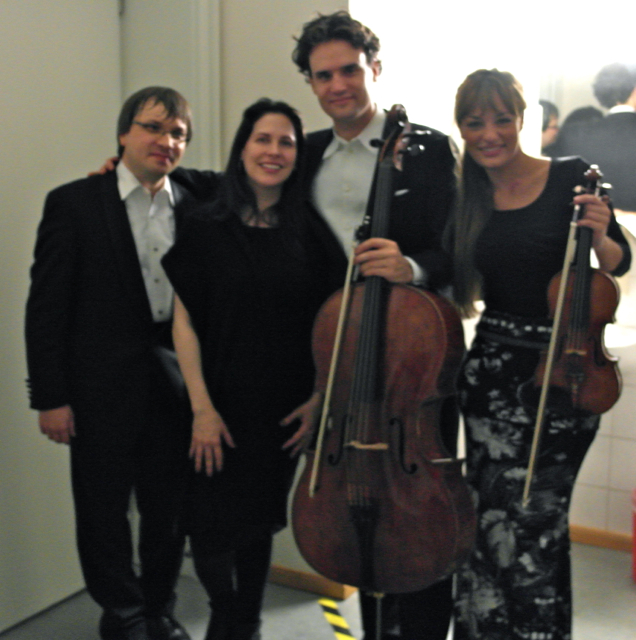 ★★★★ An Evening with Nicola Benedetti
...Between these two artfully paired pieces came the world premiere of Arlene Sierra’s latest piano trio, Butterflies Remember a Mountain. This consists of three delectable miniatures, inspired by the haiku-like title of an article the composer had read in a scientific journal. It was about the discovery of a hard-wired memory which leads migrating butterflies to make a strange diversion round the North American Great Lakes, where apparently an impassable mountain once stood. Sierra’s response was the creation of a small wonder of her won: minutely crafted fluttering phrases, precisely and joyously imagined, and performed with meticulous commitment and obvious pleasure.
- Hillary Finch, The Times

Otherwise it was Arlene Sierra’s intriguingly entitled Butterflies Remember a Mountain (2013) – taken from a scientific headline about migrating Monarch butterflies still diverting their route over Lake Superior because millennia ago their way was blocked by a mountain. Sierra said she liked the haiku-like brevity of the headline and proceeded to compose – at Elschenbroich’s request – a short three-movement work, where the movements follow the title exactly: Butterflies; Remember; A Mountain.
From the whispering and whirring of the opening, over Ravel-like piano splashes (Sierra acknowledged the influence of this composer) before the violin takes flight, to the more minimalist repetitions of the finale, via the more thoughtful and nostalgic second movement – low cello pitched against high violin – this is a most involving work. This Prom epitomised the scope of the Proms in upholding the musical traditions of the past alongside the presentation of the new.
- Classical Source

The three movements reflect this; the skittering Butterflies brings images of the insects themselves, Remember ...is elegiac and clearly redolent of remembrance and A Mountain has all the majesty of an imposing vista. Here the Benedetti Elschenbroich Grynyuk Trio were not in the romantic, soundworld of Brahms but they told a story that was ephemeral, wistful and emotional by turns. They did this so well that they gave Butterflies Remember a Mountain a profundity that belied its 11 minute length.
- Seen and Heard International

UK première of Arlene Sierra‘s piano trio Butterflies Remember a Mountain. Commissioned by the Bremen Philharmonic Society, the work is another betraying Sierra’s fascination with the behaviours & mechanisms of biological lifeforms, from tiny creatures (Colmena; Birds and Insects) to humanity itself (Cicada Shell; Art of War). Obviously, it’s the former in focus here, inspired by a magazine article recounting a hypothesis that the flight path of monarch butterflies is determined by a latent memory of a long-since eroded mountain. The 12-minute work is a tripytch, each movement assigned a portion of the haiku-esque title—Butterflies; Remember; A Mountain—of which the outer movements are principally concerned with delicate ephemerality. The music is simple, gentle, operating in the first movement (which alludes to elements from Ravel’s Trio) with a quasi-modal tonality where minor & major coexist & overlap, manifesting in the form of flurries & crescendoing isolated pitches. This is ramped up in the third movement, with spritely arpeggioes & trills, & a more emphatic sense of circularity, the kind of disordered repetition that features regularly in Sierra’s work. Its trajectory is one of constant growth, trills becoming tremolandi (plus octave-unison melodic writing, serendipitously echoing the Brahms)—until it abruptly halts, pared back into a pianissimo conclusion. Brief but telling stuff, yet the central movement is altogether more so by at least an order of magnitude. Drawing on one of her own songs (‘Diving Girl’, from the Streets and Rivers cycle), Sierra establishes a dark, introspective environment that’s almost uncomfortably personal. While the piano offers tremulous flurried comments, violin & cello—practically reforged into a double-strength single entity—unravel convoluted strands of melody, intensely emotional, aching with wistfulness & the multitude of indescribable, unbidden feelings (re)kindled in all acts of remembrance. Dissipated in soft pizzicati that feel, if anything, even more intimate, it’s gone in mere minutes, but the depths Sierra taps into in this movement leave a profound impression that will last for days.
- Five Against Four

Arlene Sierra’s Butterflies Remember a Mountain, receiving its UK premiere, was inspired remarkably by a scientific study on the migration patterns of the Monarch butterfly. It appears that the butterfly flies in a giant circuit over the Great Lakes in order to circumvent a mountain that used to exist there in primeval times. The first movement deals with the fluttering of the butterfly, the second with memory while the third embraces the might of the mountain and recalls an earlier large piano piece Ms Sierra wrote. A work of this type requires exceptional precision and a disciplined approach on the part of performers... the Trio gained the approbation of both the composer and the audience who responded enthusiastically to the refreshing and unusual timbres in this piece.
- Seen and Heard International

The 'crack' group at the 3rd Philharmonic Chamber concert in the chamber hall of Die Glocke was a piano trio with the already established musicians Nicola Benedetti (violin), Leonard Elschenbroich (cello) and Alexei Grynyuk (piano).
One experienced better harmony in the premiere of the Piano Trio "Butterflies Remember A Mountain" by American composer Arlene Sierra, a work commissioned by the Bremen Philharmonic Society. This beautiful work ranges between impressionistic harmonies in fourths and fifths and noise-like sounds, from points and lines rather than thematic formations, concentrated and economically presented in each of the movements. Well-deserved applause for the composer, who was present at the performance.
- Hartmut Lück, Weser-Kurier, Bremen

The youngsters who formed a trio five years ago are the violinist Nicola Benedetti, who plays a wonderfully sonorous Stradivari (1717), cellist Leonard Elschenbroich who plays an equally wonderful instrument (Matteo Goffriller, 1693), and Russian pianist Alexei Grynyuk.
A subtle work: "Butterflies Remember A Mountain" by Arlene Elizabeth Sierra. It refers to a phenomenon of butterflies flying a long detour on migration because their ancestors have taken a route, in spite of changes in the environment. Sierra makes a haiku-style three verses out of it; so three movements - light, dazzling moves, in the tenderest tone of butterflies, reminding one of a melancholy softness; and a fickle detour over a mountain with virtuoso string flickerings and massive chords from the piano.
- Gabriele Seybold, Frankfurter Neue Presse

The young piano trio, with Italo-Scottish Nicola Benedetti on violin, Leonard Elschenbroich of Frankfurt on cello and the Ukrainian Alexei Grynyuk on the piano, guested at the chamber music series in the town hall. What they presented was to some extent a dark current of thought, interrupted by a swarm of colorful butterflies. The dark current of thought, these were the late piano trios of Schumann (Opus 110) and early Rachmaninov (Opus 9). The swarm of colorful butterflies fluttering through the piece "Butterflies Remember a Mountain" was by Miami-born, London-based composer Arlene Sierra.
Whirring harmonics
Arlene Sierra was inspired, for her brand-new piece (it was the third performance), by a species of butterfly that flies on its migration from Canada to Mexico around a mountain long since removed, that lives on in the genetic memory of the insects. With delicately swirling harmonics and tremolos, the musicians dived into this insectoid soundsphere. Here charm, light, weightless, shimmering, circular motifs, condense and increase until the exhausted butterflies cloud around the imaginary peak. A poignant scene.
- Armin Knauer, Reutlinger General-Anzeiger

A reunion with Nicola Benedetti and Alexei Grynyuk, this time with Leonard Elschenbroich.
How nice to see these artists in the chamber music hall of the City Hall, more intimately and more intense than in the Lizst Hall . Now as a trio, which still has no name, they left us with a profound interaction and a compelling attention to presentation. The young cellist Leonard Elschenbroich complemented the duo Benedetti / Grynyuk excellently, he made the announcements and also proved to be a musically like-minded third man.
Sure technique, clear articulation and contrasted and nuanced sound design allowed an enjoyable exploration and savoring of the phrases.
Highly topical as the "commissioned work for piano trio" the announced piece by U.S. composer Arlene Sierra (born 1970), entitled "Butterflies Remember a Mountain" received its third performance recently in Reutlingen.
It is inspired by a puzzling butterfly migration in our own time through North America, around Lake Superior, the piece describes a detour because - maybe, eons ago - there was a mountain. That insects would also give rise to advanced string-tone painting was to be expected.
But Arlene Sierra follows her own rules: The three movements are concise and transparent structures. Thus, the three musicians created a dense atmosphere in which the fluttering and whirring, above all the wordless secret space was to unfold. A fascinating piece, brilliantly interpreted - and given loud applause.
- Susanna Eckstein, Südwest Presse