The piano concerto Art of War is an oppositional drama inspired by Sun Tzu's work of the same name, an ancient book of military strategy. The piece is in two movements of equal length entitled Captive Nation and Strategic Siege. Material from the first movement reappears in the second, suggesting a larger, single ‘battle scenario’ that plays out with two different outcomes.

Listen to a BBC Radio 3 Introduction to the work:

Listen to excerpts from Art of War from the debut recording on Bridge Records: Game of Attrition: Arlene Sierra, Vol. 2, performed by the BBC National Orchestra of Wales, Huw Watkins, piano and Jac Van Steen, conductor.

"If a small country does not assess its power and dares to become the enemy of a large country, no matter how firm its defences be, it will inevitably become a captive nation."

This quotation from Sun Tzu gives a sense of the role of the soloist in the first movement. The piano instigates conflict yet becomes subsumed, its gestures provoking the orchestra and leading to fleeting moments of repose before an uncertain conclusion.

"Complete victory is when the army does not fight, the city is not besieged… but in each case the enemy is overcome by strategy. This is called strategic siege."

In this movement the role of soloist is changed from instigator to saboteur. Its gestures chip away at a wall of sound created by the orchestra, subtly manipulating it until the orchestra follows the lead of the piano and succumbs to its persuasive power.

Art of War was commissioned by a consortium of American and British donors, in memory of Viola and John Santana, for the BBC National Orchestra of Wales with Huw Watkins, piano. 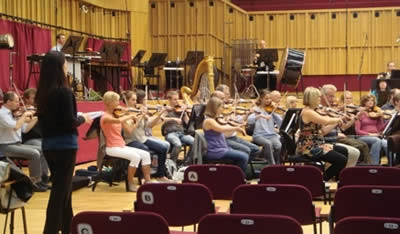 This year's focus has been on the Estonian composer Arvo Pärt, 75 this week; ... But an instant corrective was delivered by Arlene Sierra’s vibrant Piano Concerto, subtitled “Art of War”, which showed how static harmony and obsessive rhythm can serve as pivot for a mobile and eventful design. Huw Watkins launched into the solo part with energy and confidence, looking and sounding for all the world like the young Prokofiev. Pärt was unashamedly rebuked.

The two-movement piano concerto Art of War (2010) is as pugilistic as its title implies, Huw Watkins tightening and uncoiling the solo line against lowering orchestral forces in a tense battle of wills.

In the piano concerto Art of War, Sierra's fascination with tactics and game theory emerges again, in a two-movement work in which the piano's hyperactivity eventually overcomes the weight of the orchestra.

Pärt wasn't the only composer featured at the concert; also included was the world première of a new work by Arlene Sierra, the first time i've heard her music • The subject matter of Sierra's new Piano Concerto, 'Art of War' is not without connection to the root of Pärt's inspiration • What sets the ancient Chinese text The Art of War apart from other works of that ilk is a preparedness to include spirituality within its considerations • For a time in the first movement, 'Captive Nation', the piano hops around, at first seemingly playfully, but soon taking on a more determined, even provocative character • The percussion seem especially keen on what the piano is doing, while the rest of the orchestra seems more concerned with its own agenda • Sierra writes of the piano becoming "subsumed", but what's interesting is that this is not achieved (as one might assume, thinking militarily) through mere brute force on the part of the orchestra,
but by a rather different kind of weight, one that perhaps connects with the Taoist enlightenment referred to above • There are certainly times when the piano's material seems 'indoctrinated' by that of the orchestra around it, so perhaps this is a vanquishment more rooted in ideology & behaviour than anything else; all the same, it's hardly a pushover, the piano putting up a doggedly feisty resistance to the increasingly vociferous outside forces brought to bear on it • It's also interesting that much of this takes place above an essentially dance-like compound metre, giving the conflict a curious but nicely effective lilting quality • The tables are turned in the second movement, 'Strategic Seige', the piano (in Sierra's words) "changed from instigator to saboteur"; she goes on to describe how "[the piano's] gestures chip away at a wall of sound created by the orchestra..." • The movement is more obtuse in its unfolding, although ultimately more weighty & a great deal more intense • The compound metre again makes its presence felt (perhaps there's a comment here on the frivolous, game-like nature of all wars), although what's above it is this time palpably destructive & audibly uncomfortable; indeed, as the orchestra's fabric is pulled to pieces, there's a potent sense of panic, the instruments, section by section, erupting while the piano by turns twirls & hammers beneath • That's when it's not taking a step back from the action; at the orchestra's most frantic moments, there's a real sense of the piano watching the destruction from a distance • It's a splendidly vivid work, & once again the BBC NOW are on top form, never letting the convoluted textures sound stodgy • As a first encounter with Sierra's music, it's very impressive •